Do Children’s Books Need To Have A Message?

In the time since I unexpectedly turned into an author, publisher and observer of children’s picture books, I have become aware of a seemingly common feeling among authors that children’s books need to have a message or at least be worthy of a teaching moment. We live in an ever more complicated world that challenges the abilities of any of us to negotiate it. It would seem to follow that children’s books are a natural way to introduce young ones to some of the complexities and social constructs of the modern world.

I have to admit that I have struggled with this notion. I really wasn’t thinking of a message with my first book, “My Dog is the Tooth Fairy”. I wrote the poem it is based on while I was a practicing pediatrician. I was more interested then in presenting a representation of how a young child begins to process the world as realities start to butt up against the fantasies and magical thinking of early childhood. It was only after my wonderful illustrator, Ashley McKeown, turned that poem into a book several years later and I began to look at marketing it that I began to understand what the current children’s picture book world was all about.

When I was growing up, I enjoyed Dr. Seuss books because they were fun and didn’t seem to be preaching to me. Actually, twenty-seven publishers rejected Theodor Geisel’s (AKA Dr. Seuss) first book, “And To Think That I Saw It On Mulberry Street”, because it didn’t contain a moral message. Looking back now, his books were far from devoid of messages. He held strong views about American society and this did come through in some of his books. “Oh, the Places You’ll Go!” was certainly an encouragement for self-betterment while “The Lorax” spoke to the potential environmental consequences of capitalism. His “How The Grinch Stole Christmas” reminds us that true happiness is found in the spirit of community that Christmas engenders rather than it’s often crass commercialism.

Our second book, “A Gift You Don’t Want”, was also based on a poem I had written several years earlier. It is about a boy who gets the flu. His mother tells him his best friend “gave” it to him. When the boy ends up giving it to his sister, someone he never shares with, he realizes that “Perhaps there are some things you give without knowing. You pass them along though nothing is showing”. Again, it was my interest in the psychological development of children, more than delivering a message, that motivated me to write the poem. This time though, after a longer exposure to the nature of contemporary children’s books, I felt it necessary to add an educational section about Flu Facts at the end when it was turned into a book. My upcoming book is based on a poem I wrote after I retired from practice and was already publishing my first book. It has a more distinct, though subtle message, and will also include a learning section.

I guess the point is that I am evolving but still struggling against any mandate that my books should have some more overt message. Certainly, books have value if they can help children make sense of their world and their role in it. That said, they are likely to be more successful if they can do so in an entertaining and not overly moralistic and overt manner. Perhaps the most important thing children should come away with from books they are introduced to early in life is a love of reading itself. I still feel that, sometimes, a children’s book can and should just be fun.

I would love to hear what any readers of this post think about the goals that books for young children should aspire to.

Co Authored by Steven Viele and Ashley McKeown
Steven Viele, M.D., is a retired pediatrician, and Author of Children’s picture books, “A Gift You Don’t Want, and “My Dog is the Tooth Fairy”, both illustrated by Ashley McKeown.
Lollypopbooks.com.
FB
All references pertaining to the above are available upon request.
A-Gift-You-Don't-Want, Ashley-McKeown, Books, children's-books, Dr-Seuss, Moral-of-Story, My-Dog-Is-The-Tooth-Fairy, pediatrician, Reading, Steven-Viele 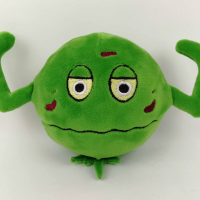