Breastfeeding Does Not Work for Every Mom

I’m going to talk about something that folks don’t like to bring up and people can relate to…NOT BEING ABLE TO BREAST FEED.

Before I had our son I was dead set on breastfeeding and my mind was only set on that. Ever since delivery, Colt wouldn’t latch and I wasn’t producing a good amount at all. Luckily, he got the colostrum he needed after he was born.

I tried to breastfeed until Colt was 4 months old, because I didn’t want to give up and feel like a bad parent, as that’s how society portrays it. I was an emotional roller coaster. I got a lot of symptoms of PPD (PostPartum Depression) due to the stress of trying to breastfeed. I was lashing out at our son, our dog and my husband. I would get crabby and so would Colt. I would also cry and cry and cry.

Me trying to successfully breastfeed our son was the most challenging, stressful and emotionally/mentally draining thing I have ever done. We decided to just feed formula, because PPD is nothing to mess with and breastfeeding wasn’t successful. Our son is formula fed and is excelling and is in the high percentile for a lot of things. Formula fed doesn’t mean lack of anything.

Society puts so much pressure on moms to breastfeed their child and that isn’t fair. Some women just can’t produce, some women don’t have the right breasts to breastfeed and some babies just won’t latch regardless of what the mom tries. STOP PUTTING PRESSURE ON MOMS TO BREASTFEED.

All you see is “breast is best” and you see people applauding women for breastfeeding, but you don’t see people applauding women who formula feed. Breastfeeding isn’t the only way to feed a baby, let alone a healthy baby. No matter how you feed your baby, its still around the clock, sleepless nights and zombie looking moms who are exhausted. Formula fed isn’t the easy way out.

It’s OK to not breastfeed or only be able to do it for a short time. FED IS BEST. There I said it. 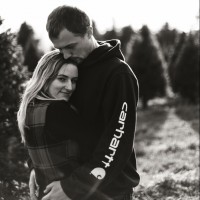